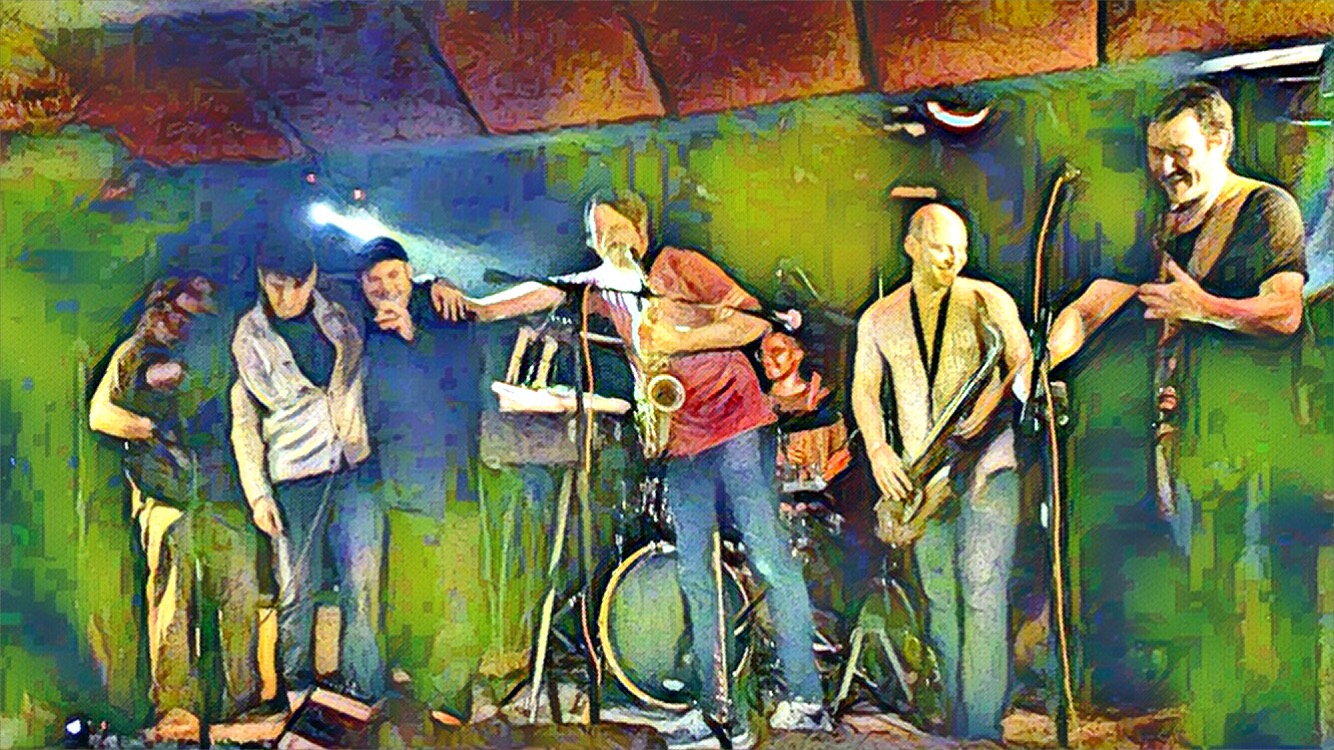 Notes on the Show:

Most magical night Honker’s ever seen thanks to Jeff Pettit, Yolk and our amazing friends, fans and family. Nights like this are the reason I could not stay away from being in a band. There was such love, joy and laughter in the room. This is why music is important. We do our best to respect that and create as much music and magic as we can.

So let’s get right to it: Surprise! Jimmyjohn McCabe, our old friend and the singer for Yolk, came out of the shadows and hung out at this show. He has stepped away from the music scene and I had not seen or spoken to him in months. I was not even sure where he was living. He was the last guy I expected to see. Everyone in attendance was happy to see him. So that was a bit of magic right there, a surprise visit from an old friend who is doing well.

This show is the CD release party for our friend and Yolk saxophone player, Jeff Pettit. We were so glad he asked us to play. Since Honker already knew a few Yolk songs, I suggested to Jeff that we do one of them in between our sets. Next thing I know, Adam and Pete are going to come and join in too! So we decide to do So This is Heaven and we dedicate the show to our dear old friend Matt Murphy, Yolk drummer, may he rest in peace.

Show time. I am unloading equipment in the parking lot when Jimmyjohn pulls up and says hello. Holy crap! He says he is staying for the show. I said “Dude, I didn’t know you were coming. You don’t know what you’re in for. We’re doing a Yolk song.” Jimmyjohn said something like “Yeah, well have fun with that.”

So that’s that, we’ll just go ahead as planned and split the three verses between Jeff, Pete and I. No problem. I did not expect him to sing and I knew I could not convince him. I’m not letting that ruin a good time for either of us.

So after the Honker set, which killed by the way, we do “So This Is Heaven” and Jeff, Adam and Pete come onto the stage. Proper respect to Tim Linkroum and Jeff Howard for learning the Yolk stuff and helping create this awesome moment. We do the first two verses and the solo section. We do half of the last first, then during the horn riff in the middle, Jimmyjohn jumps up! The crowd goes wild! Hell, even I started jumping around! he sang the rest of the song with us and that’s how magic is made folks! Great time.

Thanks to everyone who ever liked Yolk, Honker and any of the music any of us are making. Looking forward to more magic.

So This Is Heaven Video:

Here’s an edit of audio and video from a few sources. Mostly HD and in focus with best quality audio.

Special Guests on Track 10, So This Is Heaven:

Here’s the audio at Archive.org. Use the link below the player for access to file downloads.